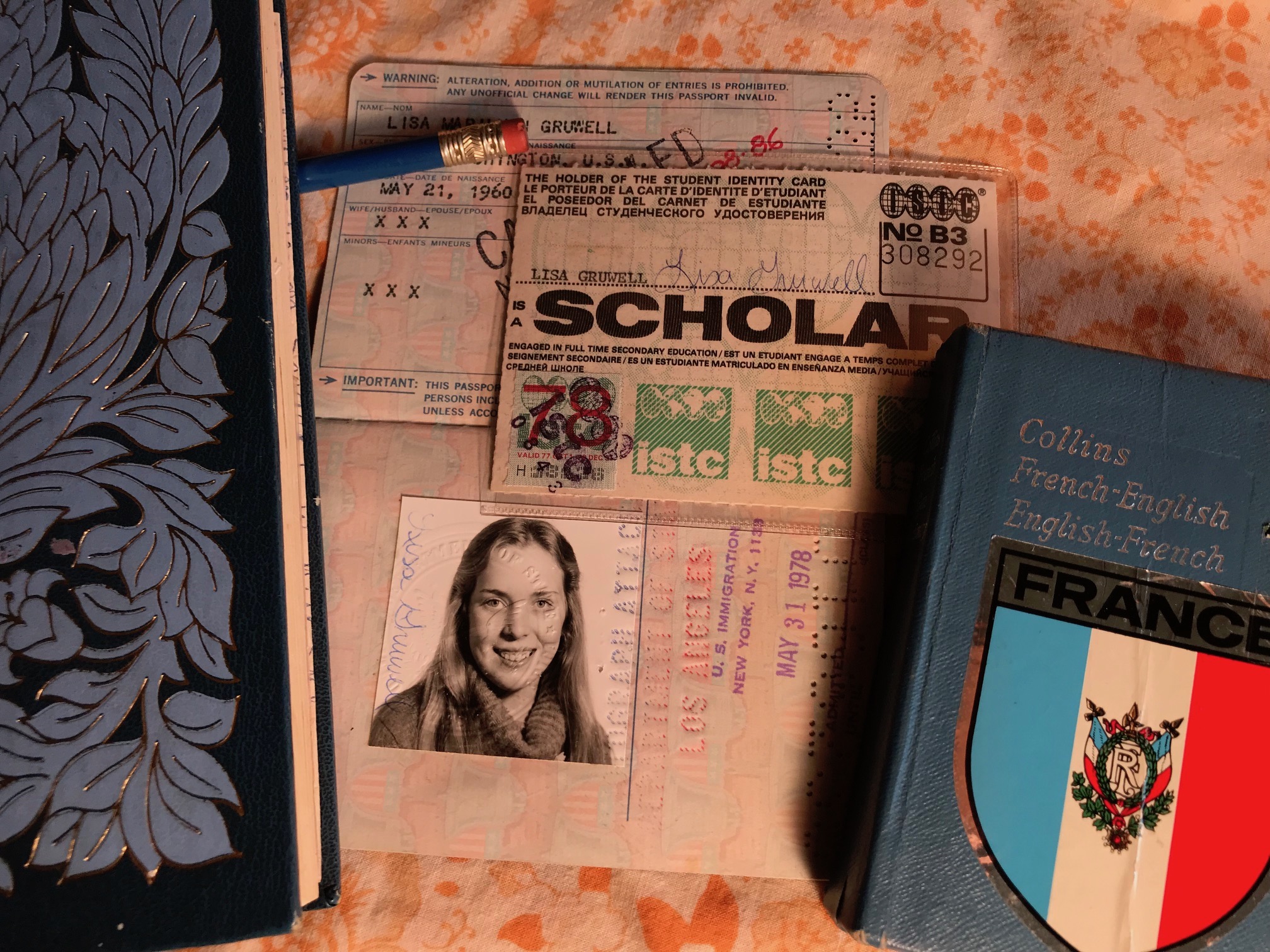 An American hippie girl, coming of age in France

I was 16, starting out in a big city high school, from rural northern California to LA. I wanted to live my last two years of dependence with my dad, animator and artist Paul Gruwell. Moving from my mom’s back-to-the-land homestead in rural northern California, I made a brave leap to live with Dad in the big city, and finish high school in Los Angeles. My dreams of academic excellence, performing arts, sports, and camaraderie went splat. A few friends and I shared the low-rank of “new kid.” The girl cliques were closed. Aside from occasional rides home on a friend’s motorcycle, not one guy asked me out. I didn’t make the gymnastics team. My audition for the high school musical landed me yet again in the chorus. In my senior year, the class officers chose to name the class of 1978 “The Elites.” What does that mean? I looked it up. These are not my people.

Dad worked all the time. When not at the animation studio, (in the 70s, that was Hannah Barbera) he was busy in his home studio–an animation desk at one end of the living room. Long horizontal sheets of background artwork taped to the wall served as the décor at the studio end of the room; his geometric-phase paintings on canvas were proudly displayed on the walls at the other end, around the couch and chairs. Dad had a clean, post-modern sense of style, expressed by Swedish furnishings, even if it was rented. In LA, people in the film industry are transient. If one can’t find another gig before the bills are due, it’s easy to get the rental company to come get their furnishings. This was Dad’s strategy. His income in the animation industry was seasonal: there was Saturday Morning Cartoon season, and then Freelance season–when we didn’t have a couch. Dad designed and drew album cover art for recording artists like Cheech and Chong, and animated the film for their song, Basketball Jones.

Dad’s work fascinated me. I went everywhere I could go with him, given our schedules. Living in LA was more about time with Dad than a big city high school. He animated a song for folk-rock duo Seals and Croft (still one of my favorite ‘70’s bands), called Forever Like the Rose; this was before MTV, when short films screened in movie theaters before the feature. He often left us kitchen table notes, as we got up after he left for the day. One morning, Dad surprised my sister Gina and I with a note: “Make a picnic dinner and dress for an evening outside. I’ll be Home by 6, be ready to go.” I remember thinking, “Oh cool, dinner at the beach.” But getting on the Santa Monica Freeway, instead of turning west to the coast, we drove east toward Hollywood. Approaching the sign for the Hollywood Bowl, an outdoor amphitheater, the marquee announced: Tonight – Seals and Croft. We had second-row center seats and it was a concert I enjoy to this day.

I determined to do something amazing for the second half of my senior year. With 3 years of French language, adoration of French culture, and ancestry among French Huguenots (escaping religious persecution, my Gruwell ancestors immigrated to America in the late 1700s), I decided to go to France. Perusing the back pages of Sunset Magazine for international study-abroad programs, an ad for The Experiment in International Living seemed good. I applied and was accepted. My program was from January through May of 1978. I would be living with a family in southwest France and attending school. To fund my expedition, I wrote for and received a scholarship from the French Government. From my after-school job behind the bakery counter at The Boulangerie in Santa Monica, I saved every dime.

Like a rite of passage, Dad took an afternoon off work and maneuvered his VW microbus into downtown Los Angeles to help me get my passport. He decided to get his, too. I still have his passport photo from that day (see top of this post), because they give you two. Dad and I truly liked hanging out together. Once I tagged along on his visit to a Transcendental Meditation center in Westwood Village, and decided to learn this form of meditation. I trained and received a personal mantra, with instructions not to share it. Dad and I joked about what would happen if we revealed our mantras. Wouldn’t it be funny if our mantras were the same?

My journey to France was a life-affirming rite of passage. Now I am a mother with a daughter in high school who is on her way to master the French language. When we converse en francais, I feel proud we can speak more than English. Maybe we’re experiencing epigentics, the ancestral stirring. Spending her 17th summer in France, my daughter inspired me to return to my archives, where I unearthed the travel journal of my 17th year, and turning 18 in Paris.

In January of 1978, I participated in an international studies program based out of Brattleboro, Vermont, The Experiment in International Living. The international educational program provided home-stay experiences for youth ages 17-24, from and to cultures around the world. Students attend a three-week culture and language intensive at The Experiment campus in Brattleboro. And then, we all fly off to our respective homestays—American students heading abroad, and foreign students to homestays in on of the states. I was flying out of LAX on January 29 to Brattleboro, Vermont, destination: headquarters for The Experiment in International Living, where it was the polar opposite climate from Southern California. Our group traveling to France was assembling for a three-week language and culture intensive. This included a luggage hike. We had to carry our luggage for a mile-long hike in the snow. What we couldn’t carry, we would be shipping home.